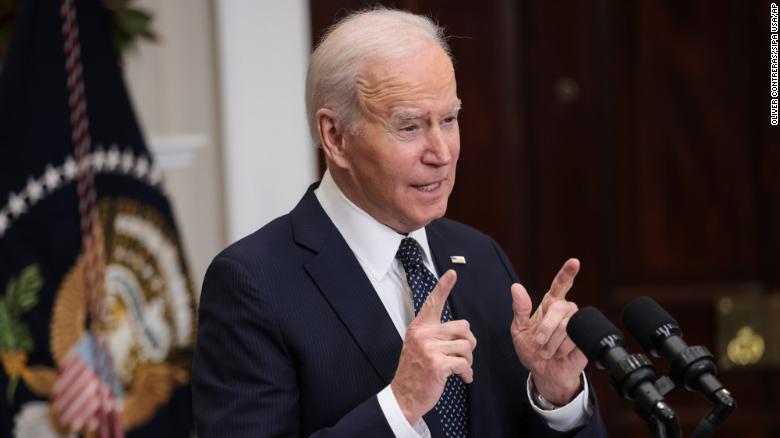 President Joe Biden in the Roosevelt Room of the White House on Friday, February 18, 2022.

The investments, which are the latest step the administration is taking in unsnarling persistent supply chain challenges that have plagued Biden since he took office, come a year after he signed an executive action ordering a comprehensive review of supply chain vulnerabilities.
“Today we’re announcing a major investment in domestic production of key minerals and materials,” Biden said at a White House event. “China controls most of the global market of these minerals and the fact (is) that we can’t build a future that’s made in America if we ourselves are dependent on China for the materials that power the products of today and tomorrow. And this is not anti-China or anti anything else. It’s pro-American.”
The President announced $35 million in funding awards to the Nevada-based mining company MP Materials from the Department of Defense’s Industrial Base Analysis and Sustainment program to separate and process materials at a Mountain Pass, California, facility. The investment will allow MP Materials to establish a full end-to-end domestic permanent magnet supply chain, creating more than 350 jobs by 2024 and upping the nation’s competitive capacity with China, which is currently responsible for 87% of the global permanent magnet market, according to the administration.
In addition, Berkshire Hathaway Energy Renewables and Redwood Materials announced new investments in facilities to extract and extend, respectively, the life of lithium materials, which are crucial in the production of battery technology.
Biden said the US needs a supply chain that is “reliable” and includes “critical materials like lithium, graphite, rare earth materials, which are badly needed for so many American products.” He added that “up to now, we’ve had to import a significant portion of them, close to 100% importation, from other countries, particularly China, Australia and Chile.”
“We’ve seen what happens when we become dependent on other countries for essential goods, like computer chips. Everyone’s become aware of that, because the computer chips are so badly needed,” the President said. “Why did the cost of an automobile skyrocket and become about a third of the reason for an increase in inflation? It’s because they didn’t have the computer chips. You can’t build an automobile today without those chips.”
California Democratic Gov. Gavin Newsom, national climate adviser Gina McCarthy, Deputy Secretary of Defense Kathleen Hicks and Energy Secretary Jennifer Granholm participated in Tuesday’s announcement.
“We think this is big. We don’t want to understate it. We also don’t want to overstate it,” Newsom told Biden. “We’re still doing a lot of the due diligence, but if it’s as big as it appears to be, this is a game changer in terms of our efforts to transition to low carbon, green growth and radically change the way we produce and consume energy. And this is a hinge moment in the history that you’re making, not just here today, but the work you’ve been doing the last year.”
The administration was also expected to announce $140 million in funding from the bipartisan infrastructure law to recover rare minerals from coal ash and other mine waste, a sustainability effort the administration projects will reduce the need for new mining while protecting manufacturing jobs in the coal sector.
The infrastructure law also directs $3 billion in funding for refining lithium, cobalt, nickel and graphite, and battery recycling facilities, according to the White House.
Tuesday’s announcement is one of several the White House is making this week on its efforts to fix supply chain issues, a White House official told CNN, as inflation hits record highs and the prices of consumer goods skyrocket. These announcements include investments to modernize ports, fix transportation and increase domestic manufacturing.
Amid a rapidly unfolding crisis abroad with Russia’s escalating actions in Ukraine, along with market anxieties about what the ongoing conflict may mean for gas prices, US officials are trying to also keep the focus on domestic work to lower prices for American families and fix some of the global supply chain issues sparked by the coronavirus pandemic.
The White House on Thursday will announce new actions to invest in American manufacturing — including in the food, energy, transportation and health care sectors — to strengthen long-term resilience across critical supply chains, the official said.
Thursday marks the first anniversary of Biden’s executive order on fixing American supply chains, and seven federal agencies will publish six individual reports to “emphasize the Administration’s whole-of-government approach to strengthening America’s supply chains,” according to the official.
There will be two other announcements about supply chains related to the bipartisan infrastructure law on Wednesday and Friday, the official said. The official did not provide details about what exactly those announcements would be.
“By making historic investments in our ports and supply chain infrastructure here at home, we can speed up the movement of goods and reduce costs for the American people,” the official told CNN.
This story has been updated with remarks from President Joe Biden.
By Donald Judd, Kate Sullivan and Maegan Vazquez, CNN